AntiPerspirant Recall : What it Means for You Antiperspirant recall: What the finding of a cancer-causing chemical means for you

(CNN)Benzene, a known cancer-causing chemical, was found in over half of 108 batches of antiperspirant and deodorant body sprays from 30 different brands, according to a citizen's petition filed this month with the US Food and Drug Administration.

Benzene should not be used in the manufacture of drug substances or products because it is a class one solvent with "unacceptable toxicity," according to the FDA.
However, the FDA did allow a "temporary" use of benzene in liquid hand sanitizers during the pandemic, setting the upper limit to 2 parts per million.
Voluntary recall of Old Spice and Secret body sprays

**All have an expiration date of before September, 2023.

The US Environmental Protection Agency has set a much lower limit -- 5 parts per billion (ppb) -- for exposure to benzene in drinking water. The agency has also set a "goal of 0 ppb for benzene in drinking water and in water such as rivers and lakes because benzene can cause leukemia."
Last week, "in an abundance of caution," manufacturer Procter & Gamble voluntarily pulled 17 different types of Old Spice and Secret antiperspirant off the shelves, according to a press release.
A number of other brands have not yet been recalled, including batches of Tag, Sure, Equate, Suave, Right Guard and Brut that had levels of benzene at or above 2 parts per million, said David Light, CEO and founder of Valisure, the independent lab that ran the tests and filed the petition.
Additional batches of antiperspirants and deodorants, which Valisure said tested at levels up to 2 parts per million, include products made by Summer's Eve, Right Guard, Power Stick, Soft & Dri and Victoria's Secret. To date, CNN was not able to verify that any of these products except Old Spice and Secret have been recalled following Valisure's early November request to that effect to the FDA.
CNN reached out to all of these companies for response. The Village Company, which makes Soft&Dri, declined to provide a comment. Unilever, which makes Suave, told CNN in an email: "Unilever takes all safety concerns seriously, and we are conducting a robust investigation into the Valisure petition's assertions about two Suave antiperspirant aerosols."
CNN did not receive a response from the rest of the brands before publication, but the Personal Care Products Council, an industry association that speaks for 600 consumer product companies, put out this statement.
"Benzene is not an intentionally added ingredient in body spray products; however, the U.S. Food and Drug Administration (FDA), as well as product manufacturers, are aware that it may be present in food and drug products at very low levels," PCPC wrote.
"PCPC and its member companies are firmly committed to ensuring consumers have access to cosmetics and personal care products with ingredients that have been thoroughly tested for safety and follow the requirements of the law," the statement said. "Companies and individuals have a legal responsibility to ensure their products and ingredients are safe for the intended use."

Benzene is created by natural and man-made processes. The chemical, which can trick the body's cells into not working properly, is also a natural part of crude oil, gasoline and cigarette smoke, according to the US Centers for Disease Control and Prevention.
It's also used to manufacture a variety of "plastics, lubricants, rubbers, dyes, detergents, drugs, and pesticides," according to the American Cancer Society.
Exposure can be dangerous, by increasing the "risk of developing leukemia and other blood disorders," the National Cancer Institute said. 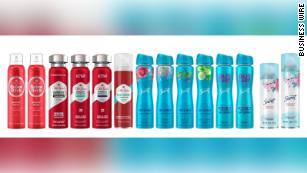 A visual of the aerosol sprays included in voluntary antiperspirant Recall.
Exposure to high levels of benzene in the air can cause death, and if "you spill benzene on your skin, it may cause redness and sores," according to the Agency for Toxic Substances and Disease Registry (ATSDR). "Benzene in your eyes may cause general irritation and damage to your cornea."
In its recall, P&G said it has had no reports of adverse reactions, adding that "daily exposure to benzene in the recalled products at the levels detected in our testing would not be expected to cause adverse health consequences."
Tests by Valisure, however, found concerning levels of benzene in some batches of P&G products. The most highly contaminated -- two lots of an Old Spice antiperspirant called Pure Sport (Lots 11671458SQ and 11671458SB; UPC 012044001912) -- contained 17.7 and 17.4 average parts per million of benzene, said Valisure CEO David Light.
"That's nearly nine times the upper limit of 2 parts per million the FDA has set for emergency use," Light said.
Secret Powder Fresh, 24 HR Aerosol (Lots 11721458SG and 11701458SH; UPC 037000711087) had about 16 average parts per million, tests showed.
"With aerosols, you might be using it every day, probably in a closed space like a bathroom," Light said.
The company tested the product with the highest levels of benzene (Old Spice Pure Sport with 17.7 ppm) in a closed bathroom, spraying once under each arm as a consumer would. By doing so, you "could bring the entire bathroom air to 15 times the limit for what the EPA has said is an increased risk for leukemia," Light said.

How does the product become contaminated?

In overall testing, levels of benzene varied greatly from batch to batch, even within a single brand, Valisure noted, while initial analysis of at least one sample of 49 lots of body sprays from 19 different brands showed no benzene at all. 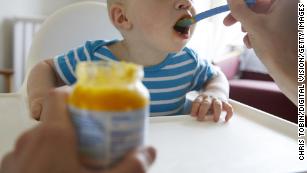 Leading baby food manufacturers knowingly sold products with high levels of toxic metals, a congressional investigation found
In total, "24 lots of body spray products from 8 different brands contained between 2.24 -- 17.7 ppm of benzene; 14 lots from 8 brands contained detectable benzene between 0.20 -- 1.89 ppm; and 21 lots from 8 brands contained detectable benzene at < 0.1 ppm," Valisure said in a press release.
None of the products have benzene as an ingredient, experts say, so the only way the chemical could have been introduced is via an error in the manufacturing process -- or by the way the chemical is delivered to the body.
Valisure said one possibility is that benzene could come from ingredients such as hydrofluorocarbon 152a, butane, isobutane, propane and alcohol used to propel sprays onto the skin.
"Our investigation showed that traces of benzene came from the propellant that sprays the product out of the can," said Kate DiCarlo, senior director of communications for the Personal Care Portfolio of P&G.
"Due to the highly specialized nature of aerosol products, we use a manufacturing partner to produce these products," Dicarlo continued. "That manufacturing partner identified an issue with their propellant supply and is implementing additional measures to address the issue identified in the investigation.
"Once the recall is complete, we are preparing to ship new product that meets our quality standards to re-stock shelves."

Other products with benzene

Is avoiding the propellants in spray products the answer to reducing risk? Possibly, experts say. However, Valisure also found higher levels of benzene in non-aerosol body odor products, including powders and sticks, Light said.
"I think there's good evidence that propellants are a significant source of this contamination but there's a variety of potential sources in the raw materials used to create the products as well," Light said.
"Impurities may be present in the manufacturing environment due to the use of certain chemicals, equipment or containers. We need more testing," said David Andrews, a senior scientist for the Environmental Working Group (EWG), a non-profit environmental and consumer health advocacy group.
"We need independent analysis as part of the overall supply chain. It's really critically important to find these problems before they get on the shelves," Light added.
Benzene has been found in other consumer products as well. The FDA warmed consumers not to use certain hand sanitizers early in the pandemic due to high levels of the solvent, and this summer Johnson & Johnson (J&J) voluntarily pulled four brands of Neutrogena sunscreen and one of Aveeno after Valisure's lab found alarming levels of benzene and filed a petition with the FDA. 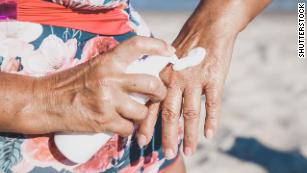 Sunscreen recall: What the finding of a cancer-causing chemical means for you
CVS Health and Coppertone also voluntarily stopped selling several sunscreen or after-sun care products due to similar findings. Light said to the best of his knowledge other sunscreens and after-sun cosmetics, which also tested positive for the toxin, remain on the market.
"There is not a safe level of benzene that can exist in sunscreen products," said Dr. Christopher Bunick, associate professor of dermatology at Yale University, in a press release at the time. "Even benzene at 0.1 ppm (parts per million) in a sunscreen could expose people to excessively high nanogram amounts of benzene."
The vast majority of tested sunscreens, however, were free of benzene, and experts stress the importance of sunscreen use to protect skin from the aging and cancerous effects of the sun.
The sunscreens tested by Valisure were only a tiny sample of the more than 11,000 registered sun care products on the market.
In response to Valisure's petition on sunscreens, the FDA told CNN that it "evaluates and assesses the information provided in citizen petitions of this type and, generally, initiates an independent testing and verification process."
In response to the new petition on antiperspirants and deodorants, the FDA said:
"The FDA is committed to helping ensure that the products we regulate are safe for use. We continually gain new knowledge which allows us to identify and quickly address previously unknown risks. When we identify drug quality lapses that pose potential risks for patients, we make every effort to understand the issues and provide our best recommendation to the public as quickly and accurately as possible. We will continue to investigate and work to ensure these types of impurities do not exceed acceptable limits."
________________________________________________________________